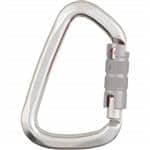 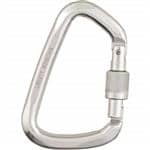 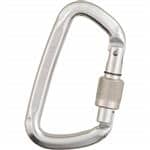 A carabiner or karabiner is a metal loop with a spring loaded gate used to quickly and reversibly connect components in safety-critical systems. Carabiners are widely used in rope-intensive activities such as climbing, arboriculture, caving, sailing, rope rescue, construction, industrial rope work, and window cleaning. They are made from both steel and aluminum. Those used in sports tend to be of a lighter weight than those used in commercial applications and rope rescue. Carabineer-style key rings have also become popular, most stamped with a Not For Climbing warning. Here at Outdoor Shopping we offer many different shapes and functions of carabiners just to name a few, oval: Symmetric. Most basic and utilitarian, also the least expensive. Smooth regular curves are gentle on equipment and allow easy repositioning of loads. Asymmetric shape transfers the majority of their load onto the spine, the carabiners strongest axis. Offset D: Variant of a D with a greater asymmetry, allowing for a wider gate opening. Pear/HMS : Specialized over sized offset-D's used in belaying. There are also two broad categories of carabiner, locking and non-locking. Non-locking carabiners have a sprung swinging gate that accepts a rope, webbing sling, or other hardware. Rock climbers frequently connect two non-locking carabiners with a short length of nylon web to create a quick draw. Three gate types are common ; Straight gate : The most utilitarian, and hence most popular. Bent gate : Curved gates allow for easier clipping in and out in special situations, such as connecting a rope to a quick draw. Gate strength remains on a par with straight-gate carabiners. Wire gate: The lightest type, with a strength roughly equal to the others, allowing more to be carried for a given weight. Wire gates are less prone to icing up than solid gates, an advantage in Alpine mountaineering and ice climbing. The reduced gate mass makes their wire bales less prone to gate flutter a dangerous condition created by irregular impact forces generated by the climbing rope or contact with hard surfaces in a fall which momentarily opens the gate (and both lowers the breaking strength of the carabiner when open and potentially allows the rope to escape). Locking carabiners have the same general shape as non-locking carabiners but have an additional sleeve securing the gate. These sleeves may be either threaded (screw-lock) or spring-loaded (twist-lock). A Screw-lock : Have a threaded sleeve over the gate which must be engaged and disengaged manually. They have fewer moving parts than spring-loaded mechanisms, are less prone to malfunctioning due to contamination or component fatigue, easier to employ one-handed. They, however, require more total effort and are more time-consuming than twist-lock. Twist-lock : Have a security sleeve which must be manually rotated to disengage, but which springs closed automatically upon release. They offer the advantage of re-engaging without additional user input, but being spring-loaded are prone to both spring fatigue and their more complex mechanisms becoming balky from dirt, ice, or other contamination. Commonly referred to as, carabiners, locking carabiner, carabiner clip, carabiner clips, carabiner lock, carabiner key ring, key carabiner, carabiner climbing, quick draws, s carabiner, steel carabiner, climbing carabiner, climbing gear, climbing equipment, rock climbing equipment, carabiner clips, and locking carabiners.